At Bugout.dev, the Palo Alto-based startup I founded last year, we build a search engine for programmers. As such, we run many experiments involving features that enrich results from our search indices before we display those results to our users. Most of these features require us to deploy backing web services.

Given our rejection rate for experiments, it is not worth the upfront effort to launch such an experiment as a production service. We prefer to launch these experimental services to Amazon Lightsail.

It typically takes us less than 10 minutes to bring up an experimental service on Amazon Lightsail. This is our process:

We build these services in a slapdash manner and deploy them at a small scale. The production applications that use these experimental features are configured to handle any failures gracefully. Deploying to Lightsail in this manner brings Bugout.dev the huge benefit of evaluating new ideas quickly, in days rather than weeks.

Setting up a production environment

If you are setting up a production environment on Amazon EC2 from scratch, the number of AWS services you have to deal with can be daunting.

Lightsail takes care of networking for you. EC2 does not. You must set up your own networking when you create a production environment on Amazon EC2. The relevant service here is Amazon Virtual Private Cloud (Amazon VPC). The easiest way to set up a new VPC from the AWS Management console is to use the VPC Wizard.

You have some flexibility in how you set up your VPC. The official Amazon VPC Getting Started guide is useful when trying to figure out what kind of setup you want. Bugout.dev uses a VPC with public and private subnets.

After you have your VPC set up, you should create a load balancer. This load balancer routes traffic from the internet to the EC2 instances hosting your web service.

At Bugout, our web services are all HTTP-based, so I like to use the Application Load Balancer (ALB) from the Elastic Load Balancing (ELB) service. A single ALB can route traffic to multiple services. It is easy to configure an ALB with custom rules that determine how it routes traffic. You can also choose to terminate TLS traffic at an ALB by creating HTTPS listeners and attaching certificates to them.

If you need to route network traffic at a lower level, you can use a Network Load Balancer instead.

With your networking set up, you are ready to migrate your applications from Lightsail to Amazon EC2.

These are the steps I take when migrating a service from Lightsail to Amazon EC2:

The benefit of already having deployed the service on Lightsail is that you already have what you need to create your AMI and security group.

If there are no snapshots of that instance, create one manually:

After your instance snapshot is created, click on the three dots next to your new snapshot and select “Export to Amazon EC2.” This brings up the following modal: 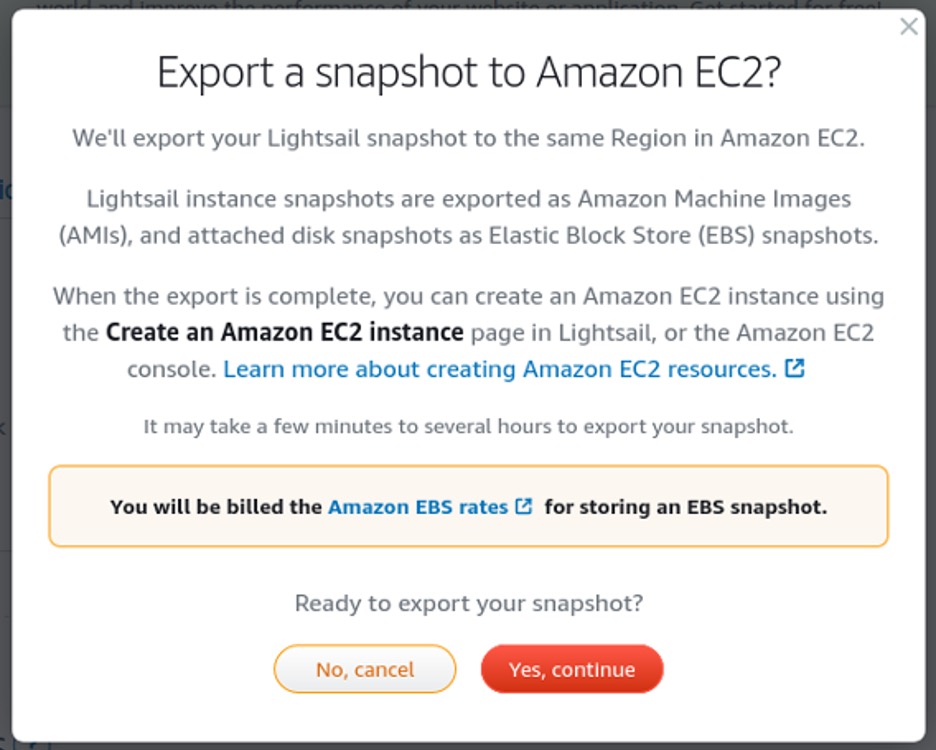 This is the quickest way to create an AMI, but this is not the method I use in practice. The Lightsail instances I work with are set up by human beings executing commands over SSH sessions. This works beautifully for experimental services, but this is not how I want production servers to be specified.

Instead, I translate the shell history of my Lightsail instances into an Ansible playbook. This allows me to specify the server setup in code. Packer is an even more powerful tool built specifically for this purpose.

Although this method takes more effort, it is well worth it for services you intend to maintain for any period longer than a week.

Since I am talking about creating production services, this is also where you should install any programs required for logging and monitoring of your service hosts.

Now that you have an AMI, you can configure EC2 to deploy that AMI as a production service.

AWS security groups are equivalent to Lightsail firewalls. You can view the firewall configuration for your Lightsail instance in the instance’s networking tab:

It is not currently possible to export this directly to a security group (as was the case with AMIs). But it’s easy to recreate this configuration on a security group manually. You can do this from the Amazon VPC console (make sure you are creating it in the same AWS Region as your VPC).

The launch template specifies that your service hosts should use the AMI and security group you created in the previous steps.

You can also specify a launch script as part of this template, which runs (as root) on instances that are started from the template.

It is easiest to create a launch template from the AWS EC2 console. 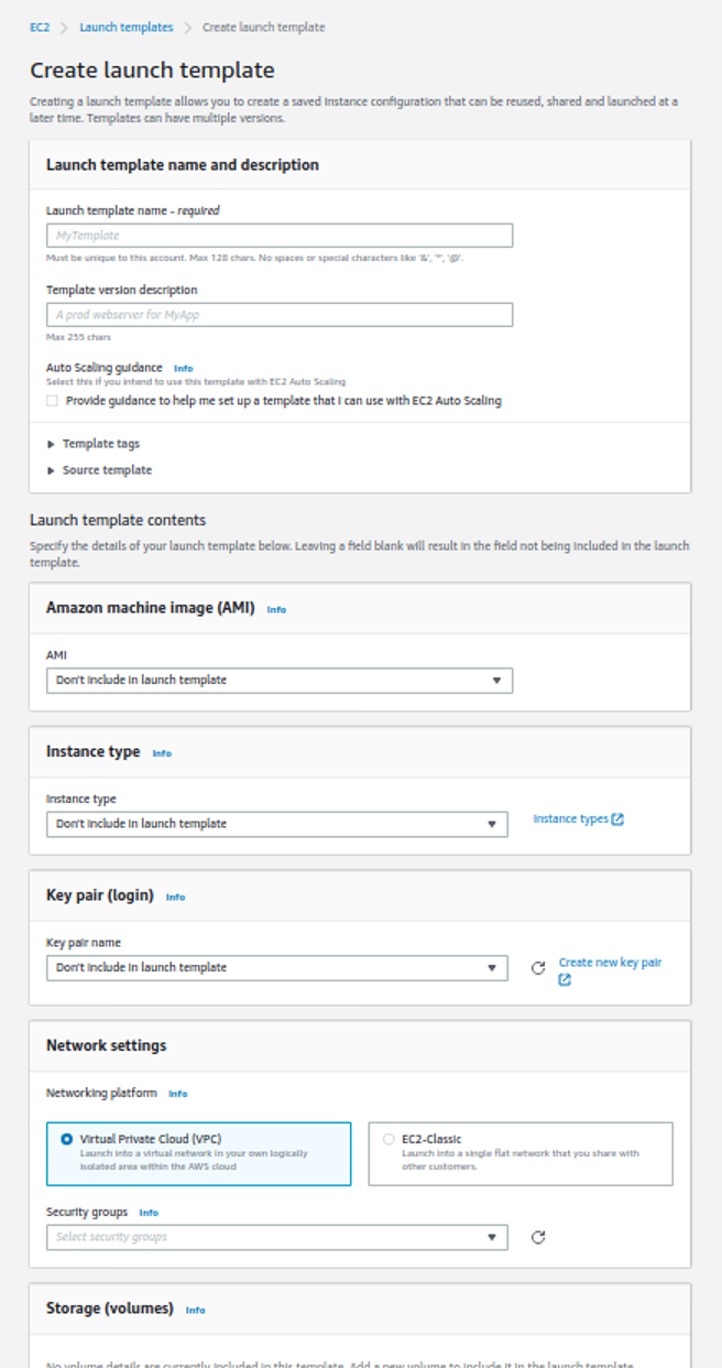 After your launch template is ready, it’s easy to create an Auto Scaling group from the EC2 console, as well. Make sure to hook this auto scaling group up to the target group you created for your service as part of your networking setup

It may take a few minutes for your Auto Scaling group to create instances. After your first instance is up, your service should be live and accessible from your load balancer.

Once you are confident in your EC2 deployment, make sure to delete your Lightsail instances and any connected storage devices and IP addresses from the Lightsail console. Congratulations! Your migration is complete.