A fundamental aspect of the bond market is the creation of new issues, or origination, which is based on processes established well before modern communication technology. While advancements have been made, such as the creation in the 1960s of a centralized trust and clearing process to address rising volumes of paperwork and security concerns, much of the legacy infrastructure remains in place. Today, underwriters/broker-dealers control primary issuance, purchasing entire offerings directly from municipal issuers and then distributing the bonds through their proprietary sales channels. This is a closed process with limited transparency that we refer to as the “single-pipe distribution system.” The entire framework was designed around a paper-based system and contains significant operational inefficiencies and reconciliation challenges.

The inefficiencies of an antiquated, paper-based capital markets system have been especially amplified this year, forcing the financial services industry to request permission from regulators to suspend back-office tasks. Many of these tasks date back to the time of paper stock certificates and cannot be completed when critical infrastructure workers are urged to stay home.

Alpha Ledger, a startup based in Washington State, is on a mission to modernize this process by leveraging blockchain technology. The two-year-old company strongly believes the immutability and cryptographically verifiable record keeping that is central to blockchain technology is well suited to address the numerous problems in the current process, including the need to be consistent with regulatory frameworks and objectives while also adding value for issuers and investors.

As Co-founder and CTO Chris Wade puts it, “When you look at the equities markets, there are a variety of structural, process, and technology design elements that support market functionality and investor access. In the bond market, that’s not so much the case. At Alpha Ledger, we’re looking to create that openness and access for the debt markets, but in a decentralized way through the utilization of Smart Contracts and use of blockchain technology.”

Amazon Managed Blockchain is the foundation upon which Alpha Ledger has constructed its distributed marketplace. Looking specifically at the municipal new issue process, Alpha Ledger’s platform connects many diverse participants into a seamless workflow for quick and efficient raising of funds. For example, municipal advisors and bond counsel, whose approvals are typically required to complete the underwriting process, interact directly with their clients through Alpha Ledger’s Decentralized Apps (DApps). These various roles communicate via the platform’s web and native DApp graphical user interfaces. Each role and DApp have access to a number of chaincode (smart contract) functions, including issuing assets and RFPs, validating assets and RFPs, primary and secondary purchases, and regulatory auditing.

The Alpha Ledger Marketplace ecosystem can be understood by viewing it as a combination of the following:

Some examples of the users and their roles, supported by the Alpha Ledger Marketplace, are described below. 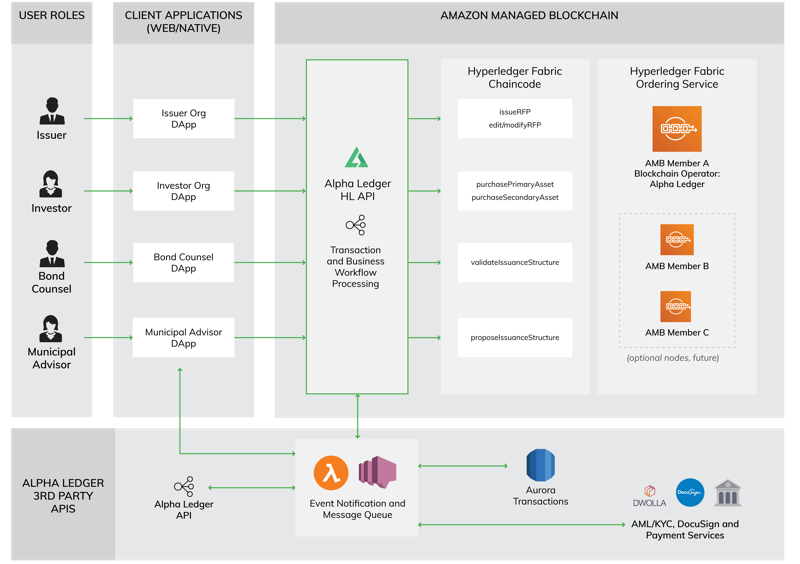 Each role is associated with a DApp client portal that provides the process automation and UI that enables the interfacing with the blockchain hosted by Amazon Managed Blockchain. These DApps may be web based or native applications running on a user’s personal device.

The Alpha Ledger API for Amazon Managed Blockchain translates user actions based on defined process workflows for specific roles. These workflows connect with Amazon Managed Blockchain at various stages to invoke chaincode (smart contracts) that create the transactions necessary to maintain the distributed, transparent, and permanent record of user actions and financial transactions. Example user actions include, but are not limited to: issuing an RFP, placing a bid on an existing RFP, placing a bid on secondary market offer, or validating a municipal bond structure.

Alpha Ledger’s core API also records the transaction data through Amazon Managed Blockchain’s event hub in combination with AWS Lambda and SQS. This allows the automated processing of workflows that link third-party APIs such as Dwolla, Plaid, and other payment services. As is the case with most financial transaction processing today, centralized third-party services are often required to meet regulatory requirements. Anti-Money Laundering (AML) and Know-Your-Customer (KYC) regulations are addressed using a combination of internal and external systems to ensure compliance and security. A user will only be able to obtain a wallet and access to the distributed network after being verified by the KYC and AML processes.

The startup’s blockchain-based platform is designed to streamline the new issuance process. Using this new format, assets are cryptographically linked together via “AL-IRIS,” an Immutable Real-time Intelligent Securities token that provides an authoritative record of ownership. This enables the ability to efficiently record market activity, supporting increased overall liquidity and providing a level playing field for all involved.

To support their back-end infrastructure, Alpha Ledger turned to AWS to achieve levels of speed and scale that would not have otherwise been possible. The team found that managed cloud services were especially valuable when it came to complex technologies such as blockchain. Setting up and managing a blockchain network from scratch requires provisioning hardware, deploying software, managing advanced security needs, and many other tasks. While mission critical, these activities typically do not add value or differentiate a company’s offerings from those of its competitors.

Amazon Managed Blockchain provided an ideal solution for their vision of an open financing marketplace. The service optimizes the network for a global community of participants, enabling market participants to design and execute ideas that leverage growing market liquidity while also maintaining compliance with regulatory guidelines. In fact, using smart contracts, these guidelines can be built into the system itself.

The idea for Alpha Ledger started to take shape in the fall of 2016. Prior, the team had spent their careers improving scalability and performance in support of trading activities, as well as developing new product strategies for the industry. Boasting more than 75 combined years of experience in the investment and technology industries, the team set out to rethink the bond market from the first principles and leverage purpose-built technology like blockchain to do it.

Looking ahead, this new platform could help open up opportunities for more projects to get funded, while also giving a larger number of people the chance to invest in and support developments within their communities.

Per Co-founder and CEO Manish Dutta, “In 2020, our focus is two-fold: first, build out an infrastructure for local governments to engage with local investors, primarily community banks, credit unions, and qualified institutional investors; and secondly, continue to build upon our regulatory journey that takes us from an agency broker-dealer to a clearing and custody model that will run on distributed ledger technologies.”

Polkadot is a ‘bet against blockchain maximalism’

Blockchain Newsletter for November: The state of blockchain standards and policies

Apple Co-Founder Wozniak Has a New Startup That Melds Blockchain and...